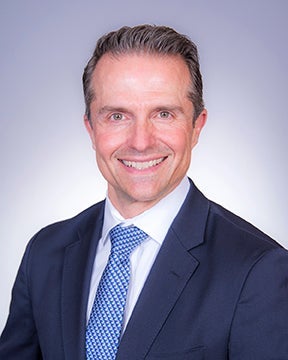 Dr. Gerard Galarneau joined Garnet Health in 2013 as the Chief Executive Officer and Chief Medical Officer for Garnet Health Medical Center - Catskills and was appointed to President of Garnet Health Doctors in 2017.

Dr. Galarneau graduated with a B.S. in Biology from SUNY Binghamton, received his medical degree from New York Medical College and held residencies in General Surgery and Urology at Beth Israel Medical Center in New York. He graduated from Carnegie Mellon University with a Master's degree in Medical Management.

Dr. Galarneau is an active member of the American Urological Association and the Medical Society of Orange and Sullivan County. He was the recipient of the 2015 Walter A. Rhulen Award; 2015 Triple Crown Garnet Health Quality and Patient Safety Award; featured in The Sullivan County Democrat's Men At Work special section and the recipient of the 2016 Sullivan County Chamber of Commerce Distinguished Achievement Award. Dr. Galarneau was also recently named by Becker's Hospital Review as a top 110 Physician Leader of Hospitals and Health Systems.