When I told my husband, Heinrich, “good night, I love you,” on June 3rd—same as every night of our 30-year marriage—I had no idea it might be for the last time.
Yet, that was the night I began to wage a battle for my husband’s life. Battling alongside me were family, friends, God, and Garnet Health Medical Center (GHMC). All Heinrich could tell us about that night was that he had fallen. Later, we discovered that a brain aneurysm has caused him to fall, and he landed on a stone wall.

In my 30 years as a nurse, I had never seen such trauma as I witnessed on my dear Heinrich that night. He was still breathing when I found him, but I knew he needed advanced trauma care, and fast! 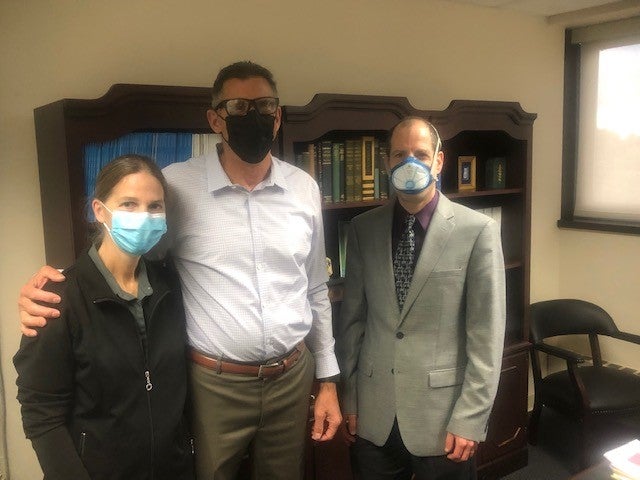 GHMC was there. Within minutes after my call, the ambulance arrived and he was rushed to the GHMC Emergency Department. Scans revealed the extent of Heinrich’s injuries: complex facial bone and skull fractures and extensive acute bleeding in and around the brain—often fatal. The talented surgeon at GHMC began urgent emergency surgery to relieve the pressure on Heinrich’s brain.

Without GHMC’s trauma services, Heinrich would not have survived the night. The first Level II Adult Trauma Center in Orange County is able to provide high quality specialized medical treatment and capabilities unavailable at any other local hospital. Garnet Health surgeons are certified in surgery and surgical intensive care—which is exactly what Heinrich needed that night.

What began as a night of hell became a night of mercy. With the expert critical care he received, Heinrich was stabilized enough to be transported via helicopter to a Level I Trauma Center. There he spent the next two months fighting to be among the 1% of patients who could survive such an ordeal…fighting to once again be the husband and father my children and I love and rely on.

From double Board-certified surgeons skilled in dealing with trauma—on site 24/7—to the nurses and other hospital staff who showed me such empathy and care, I was glad to be at GHMC Trauma Center.

On the most difficult night of my life, when I thought I would lose my husband, I found hope at GHMC. I will be forever grateful for the care they gave my husband.

Garnet Health Medical Center’s Emergency Department volume increased more than 23% from 2015 through 2019, a pattern that is anticipated to continue in the coming years due to rising population and healthcare needs in our community.

To meet these needs, Garnet Health has launched the Every Minute Counts capital campaign.

With a fundraising goal of $7 million, the campaign will support Garnet Health Medical Center’s Emergency Department expansion, which will increase their treatments spaces from 45 to 100, redesign front-end processes for improved efficiency, and expand Garnet’s capacity to provide exceptional care for more than 85,000 people each year.

Will you give today in support of Garnet Health Medical Center and the expansion of their Emergency Department as part of the Every Minute Counts capital campaign? Your generous donation of $3,000, $3,750, or $4,500 will help Garnet ensure that people all across the Hudson Valley region receive the best possible healthcare when they need it most.

Garnet Health Medical Center- Middletown and our patients, need the support of our communities to continue to bring the very best in emergency medicine to the Hudson Valley region.